I checked something off my Things I want to Try list this weekend.

I drive by the Super G Mart on Independence Blvd in Charlotte all the time. I’ve always wanted to go in. I have heard great things about it. So this weekend…I made my first trip and it will NOT be my last.

Don’t be intimidated by the International market. Sure there was some stuff there that I will never be courageous enough to try. It’s filled with asian, indian, and latin food treasures. Upon entering…you will be BLOWN away by the produce and the price of aforementioned produce. It’s amazing.

Here’s a photo of the Super G Mart…you know where it is…in the shopping center where the Best Buy used to be just past or before (depending on which way you are coming from) the CarMax on Independence.

I was in heaven in the produce department. Cooking Thai food or an asian stir fry? No problem. They have Thai Basil, fresh ginger, fresh lemongrass. Making tacos or in my case Yucutan style fish (the real reason for my visit)? No problem. They have so many kinds of peppers it’s crazy (including Thai peppers). The tomatoes? They were $.59/lb. Yup. And…I got the most amazing fresh spinach for $.99 cents. This warrants a photo. Stat.

I went there for Anchiote paste for a dish (next blog entry) and they had it in two different forms a paste and ground up. I also got some frozen veggie spring rolls, two different kinds of rice, some rice noodles and some lo mein noodles. I guess I will be blogging about asian food in the near future! 🙂 Stir fry has been on my mind.

So be brave and head on in there! To cap off this blog I will leave you with two photos that perfectly illustrate why you should go.

This was my bounty: 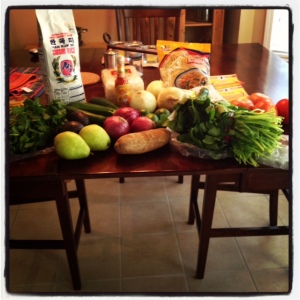 The green leafy stuff on the left…beautiful cilantro. Three bunches for $.99 cents.

This was how much the bounty cost: 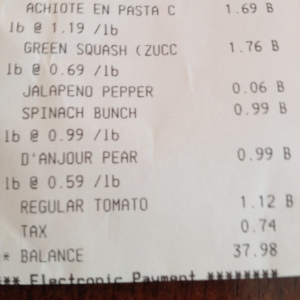 Super G Mart on Independence. Look. Into. It.

I love food. I love to try new recipes. I love to adapt old ones. I love trying new restaurants. I love watching cooking shows. I love meeting chefs I admire. I started this blog to share that love and knowledge! I hope that you enjoy! View all posts by whatkatetastes